Take Your Legacy: Monastery of Souls

Click on the link and get your title today! 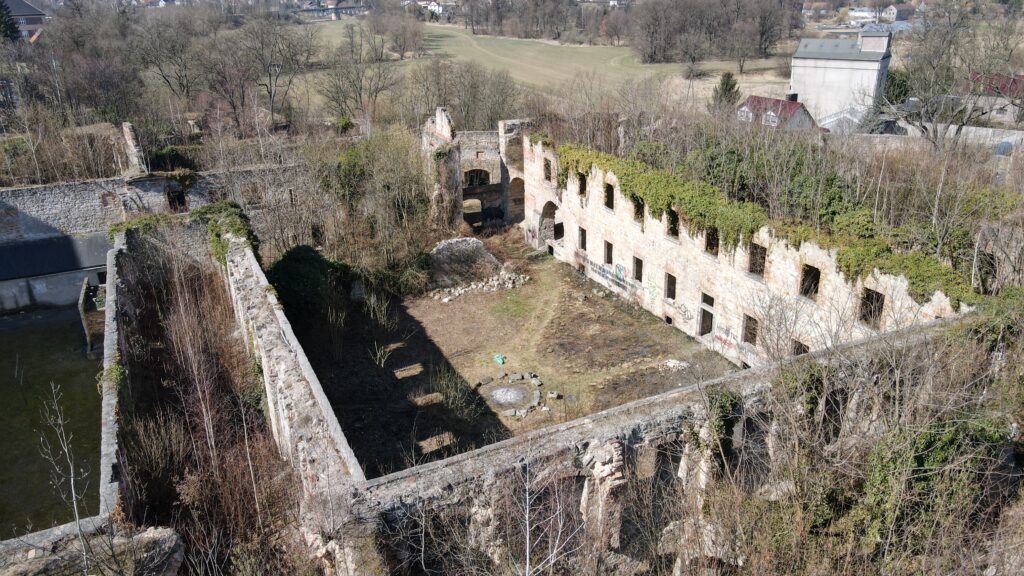 What goals do we want to achieve in the Monastery of Souls?

Reconstruction and restoration of functions in at least 70% of buildings.

The Monastery of Souls. Its long history begins in 1217, when it turned from a hunting castle into a monastic seat. Though its cast survived the plague of Black Death without a single fatality, when there were only six survivors in a neighboring city, although it was raised and restored after a massive fire in 1652, it was brought to ruin in the second half of the 20th century.

Few people in the world are able to bear the burden of saving a ruined monument on their own. But by working together, we can do it! Take your legacy into your hands today and gain the noble title on the Monastery of Souls!

“I always wanted to do something to save architectural monuments, but I had no such option” … – these are very common words among people sensitive to architectural beauty.
But how to act when the necessary outlays exceed the financial capacity of most of us?

– Together! As part of the project Take Your Legacy! and become the heiress or heir of the Monastery of Souls. 🙂

This way you will save a beautiful piece of cultural heritage as well as you will gain the noble title and privileges on the Monastery of Souls*! The deadline for taking over the care of the Monastery of Souls is set by the end of February 2022. Get on the action and meet with the other heiresses and heirs this spring!

The title of nobility is awarded as an honorary distinction to people supporting the idea, and along with the title, the following rights and privileges are obtained on the Monastery of Souls:

Additionally, the following rights can be “unlocked” in the current Second Spurt:

Duties of the Heiress and the Heir? – To have a great fun!

As long as the titled person does not run in the elections to the bodies of the FTD: Monastery of Souls foundation and does not take office, the title is purely honorary and does not oblige in any way to participate in voting, meetings of Heiresses and Heirs, or to any other activity, leaving only the privileges.

Title of Nobility for a price of a good coffee? Yes!

Nothing stands in the way of ordering a certificate for someone and making this person happy by obtaining titles and privileges for that person in the Monastery of Souls! Give your friendly soul a title of nobility now! 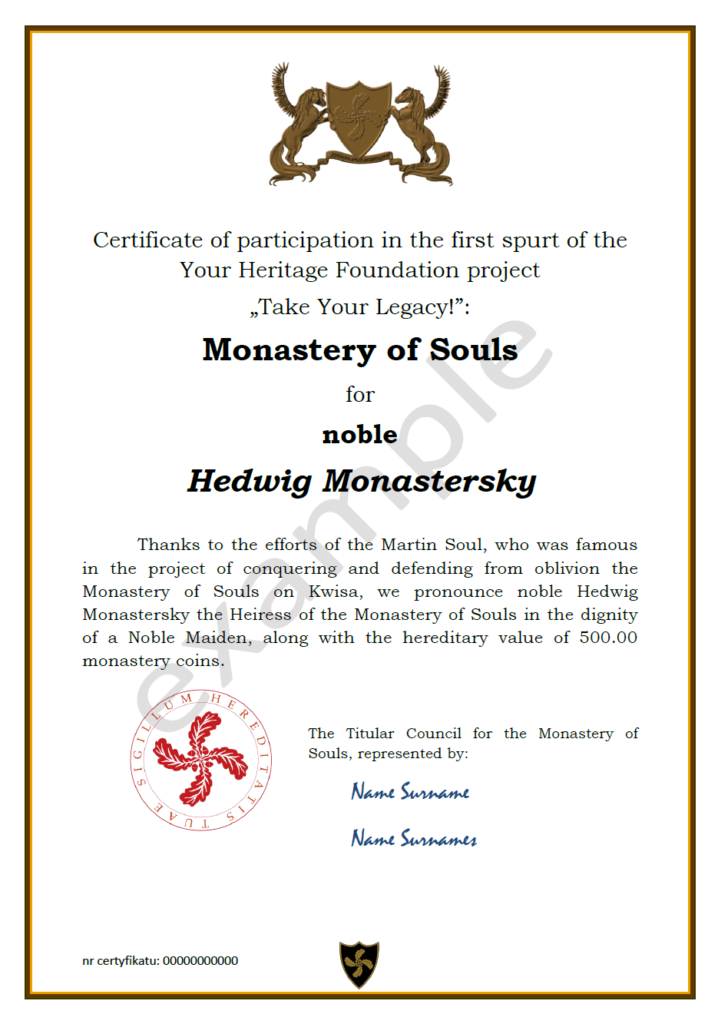 Does the amount of the contribution matter? Does a greater “hereditary value” translate into a voice on the Monastery of Souls?

In addition to qualifying for the aforementioned thresholds, the amount of your payment only translates into the “Tax Right”. Voting rights depend on your personal commitment. Even 5 EUR allows you to use “the Right of vote” during Management Board meetings or “the Right of the Office”. If someone has a head full of ideas, whether she or he is very good in a given field, important for the development of the Monastery, her or his financial possibilities translating into the contribution should not limit the rights. On the other hand, a person who contributes for example, 25.000 EUR cannot dominate the Project to the detriment of other Heiresses and Heirs. Therefore, the amount of the contribution only translates into possible profit or limited collection souvenirs. “The Right of Vote” and “the Right of the Office” will verify the actual commitment of the Heiress or Heir.

Are many Heiresses and Heirs is a stalemate for the Monastery? No! It’s a great chance development!

The more the merrier! More ideas, more contacts and more possibilities! Voting is not obligatory for Heiresses and Heirs – it is optional and advisory, so we will never stall because of lack of time nor internet range of any Heiress or Heir.

Become the Heiress or the Heir of the Monastery of Souls today as a Maiden or Knight!

Remember this, that the main goal is to save the Monastery of Souls and have a great fun, while the rights and privileges as well as our noble titles are only an addition.

We invite you to have fun together!

– the team of Your Heritage Foundation (Fundacja Twoje Dziedzictwo) 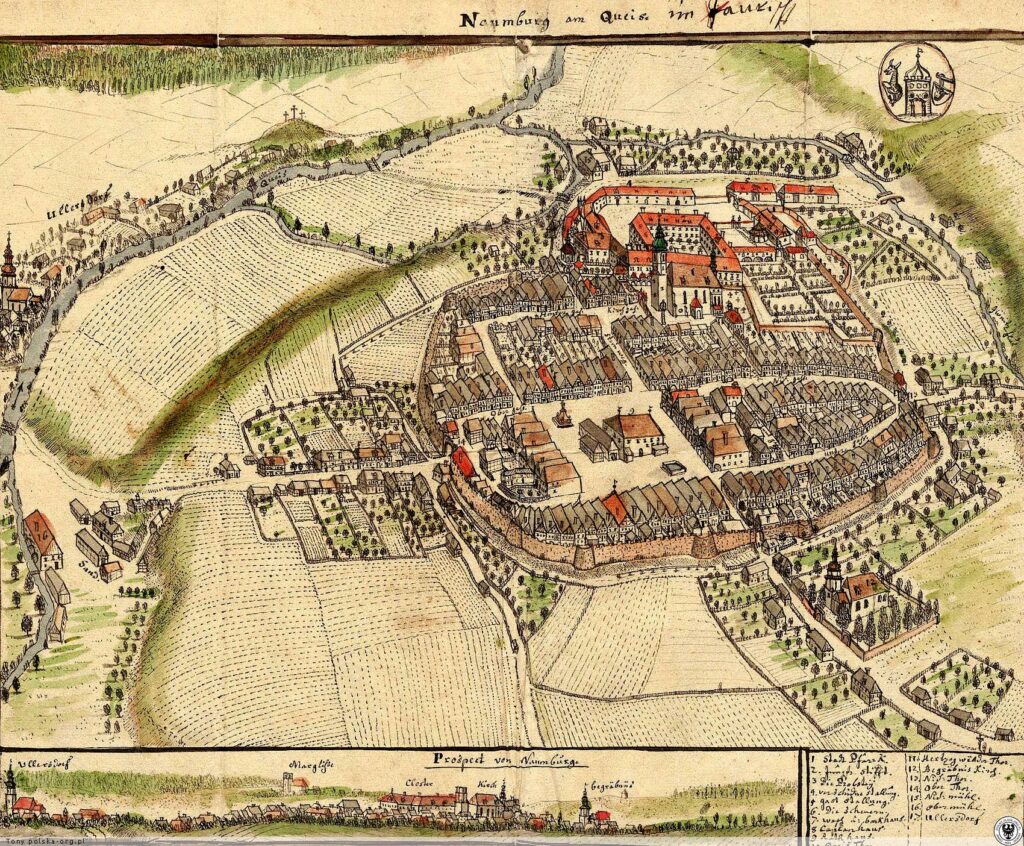 The Your Heritage Foundation processes personal data of persons participating in the project only to the extent necessary to award titles of nobility. Each participant of the project has the right to view and edit their data at any time after contacting the Foundation, as well as to permanently delete them. However, the removal of data is associated with the removal from the list of titled persons, i.e. with the resignation from the benefits of the project.

The project is a charity collection for the purpose of saving the cultural heritage, the funds will be allocated for this purpose by the Your Heritage Foundation, which is the administrator of the funds. Funds are not refundable, in particular if the donor does not like the particular monument, the donor will not like other donors around the project, etc.

The title of an heiress and an heir as well as noble titles on the Monastery of Souls are honorary titles only and therefore the donor does not bear any obligations towards the Your Heritage Foundation, FTD: Monastery of Souls foundation or the monument covered by the project. Any obligations of the donors must arise from written obligations towards the above entities (e.g. as a result of a written – traditional or electronic – application of a candidacy to the management board of The FTD:MoS and being elected, after which an heiress or an heir agrees in writing to sit in the representation body and sends the consent to the National Court Register with the obligatory form.

The monument designated for the purpose of the Project may change during a given version of the project an unlimited number of times. Funds collected as part of the collection will be used to implement the Project regardless of the occurrence of the above-mentioned changes. The changes, however, result from the availability of real estate, resources in the project and to increase effectiveness of the project implementation.

You can support the fundraiser without providing any personal data, thus accepting that it will not be possible to grant you any honorary title.

In order to obtain a certificate, please contact the Your Heritage Foundation.

Certificates will begin to be sent after the formal takeover of the Monastery of Souls, that is from March 2022. If you wish to receive the certificate earlier, please contact the Your Heritage Foundation.

The honorary title and the certificate do not entitle you to register permanent check-in in the property, nor to visit it without agreeing the date with the Foundation’s Management Board, nor to carry out any work in the monument without agreeing with the Foundation’s Management Board, nor to move around the restricted for security reasons zones, nor to represent the interests of the Your Heritage Foundation or FTD: Monastery of Souls foundation.

Persons applying for the honorary title of heiress or heir are bound by the morality clause. The title will not be awarded and may be withdrawn in the event of a conviction for an intentional crime. In the case of a crime reported to law enforcement agencies, the title of the heiress or heir may be withdrawn or suspended for the duration of the proceedings. Non-disclosure of being convicted for intentional crime also constitutes grounds for exclusion from the group of heirs. The project refers to high moral values ​​and such values ​​should accompany the heiress and heirs. The title can also be withdrawn if the titled person engages in racial, sexual, religious or cultural harassment.

The honorary title will be withdrawn in the event that the titled person acts to the detriment of the monument, the Your Heritage Foundation or the FTD: Monastery of Souls foundation.

The titles are awarded by the Titular Council established by the Your Heritage Foundation. In this instalment of the project, “Take Your Legacy!” is broadcast in two “spurts”. The first one lasts until the takeover of the monument – scheduled until the end of February 2022. From March 2022, the “second spurt” is taking place, characterized by higher thresholds for entering the project.

* The title is awarded by the Your Heritage Foundation as an honorary decoration for people taking part in the fundraising campaign. It is not a family title, it is not automatically extended to the family, including offspring. In certain cases, the Foundation may withdraw the conferring of the title along with all privileges, especially when the titled person commits a crime of wilful misconduct. The decision on the revocation of the title is made by the Titular Council for the Monastery of Souls of the Your Heritage Foundation on its own, at the request or with the participation of the Heiresses and Heirs Congregation.
** Business operation at the monument are not guaranteed. Only the profit from economic activity, less expenses for the purposes of further running, costs, renovating and investing in the Monastery of Souls, is distributed between Heiresses and Heirs. The distribution pool cannot exceed 20% of the annual profit of the monument alone. The remaining 80% is subject to further investment in the Monastery of Souls and activities for the benefit of material cultural heritage.
*** The person inheriting the title must be indicated by the presence of a notary or by a personal written declaration at the seat of the Your Heritage Foundation. If no successor is indicated, the immediate family of the titled person (parents, siblings, spouses, children) has the right to select one person from among themselves who will receive the title and apply for a title to the Your Heritage Foundation or FTD: Monastery of Souls foundation. In the event of disagreement on who it is, the remaining Heiresses and Heirs choose a new heir from among the candidates proposed by the family in a secret ballot. If it is not possible to identify a successor for a period of six months from the date of death, the Inheritance Right shall expire.
**** When Polish law allows such an option, i.e. the person is of legal age, has Polish citizenship (if required), has not been punished for an offence committed intentionally, has unlimited civil and legal capacity, etc.